The Crafts Association of BC is hosting it's annual fundraising event in support of educational and regional programing for artists by hosting a 1920's style party and craft auction.
Check out the CABC homepage for details and ticket info.
There are over 70 pieces in the auction, beautiful works from artists all over the province, including this piece of Keith's.


Bob Kingsmill, Don Hutchinson and Darlene Nairne from the Kingmill Shop also have pieces in the auction. You can see the whole gallery here.
Keith is at the shop until the 7th, so pop in and say 'hi' if you are down on the Island.
﻿
Posted by Carole at 6:55 PM No comments:

We have markets and festivals coming up fast! It's non-stop glazing, firing, ware and drum-making time down here at the ol' Poplar Studio!
First up: The Harmony Arts Festival. It runs: Friday, July 29 from 4–9 and  Saturday, July 30; Sunday, July 31  and Monday, August 1 from 10–9. We will be in booth #11, sharing with jeweller Marnie Burton. 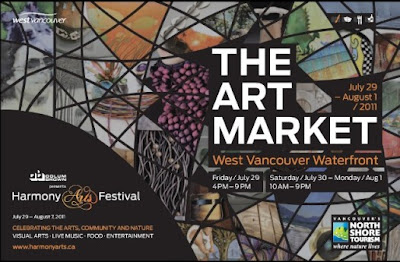 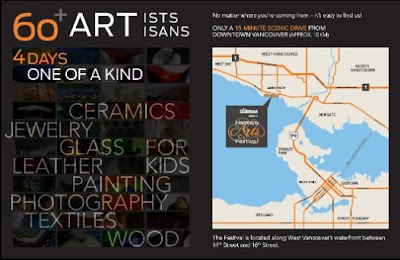 Also, check out the promo video featuring some of the participating artisans.
﻿The next Saturday, August 6th we have our first date at the Trout Lake Farmer's Market. We will be sharing a booth with the lovely and talented Stephanie Menard. Carole will be there with a selection of cuddle cups, scrambowls, some of our new dotty-ware and more!
August 1-7 is our week at the Kingsmill Studio Pottery Shop. Keith will probably be polishing up some big beautiful Poddrums, getting ready for...
The Burnaby Blues and Roots Festival; Saturday, August 13th! We are very excited to be vending at a music festival again! We used to go regularly to the North Country Fair, but it's been a while. This one is waaay closer to home, and only one day. Headliners include K.D Lang, John Mayall and Imelda Mae. It should be a great day!
Whew! Then maybe we'll take a little break and go camping.

Have a wonderful Summer and we hope to see you out there in the sun somewhere!
Posted by Carole at 8:44 AM 1 comment: 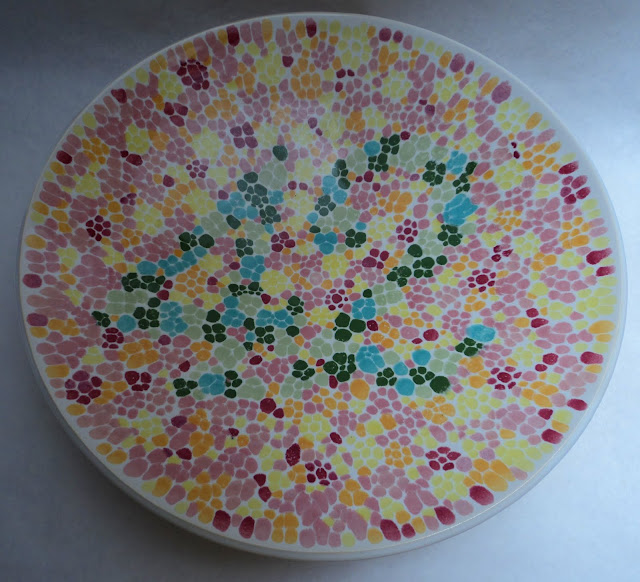 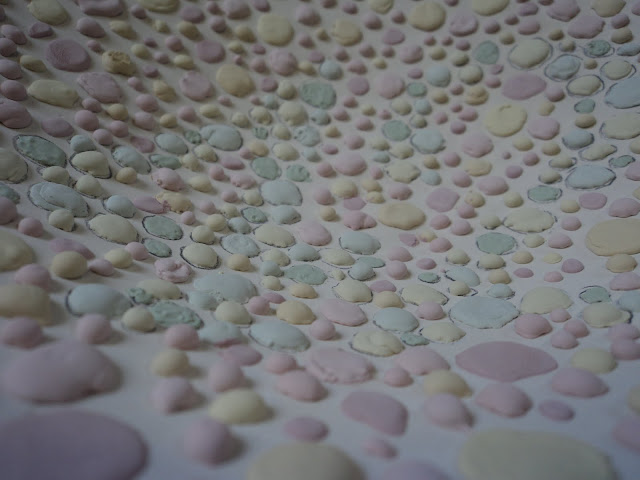 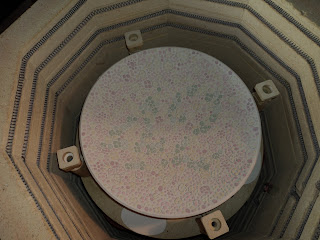 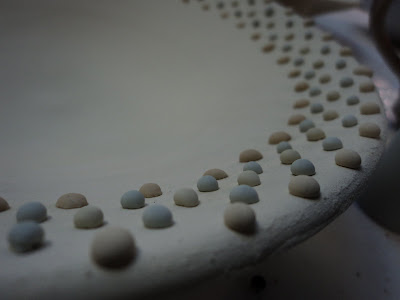 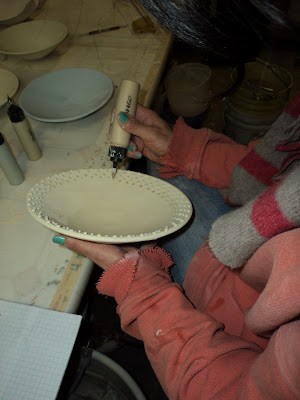 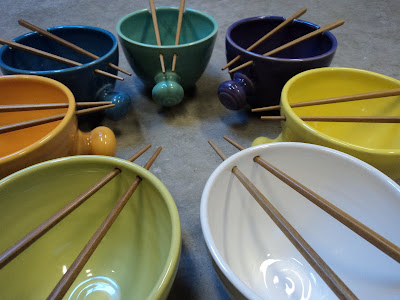 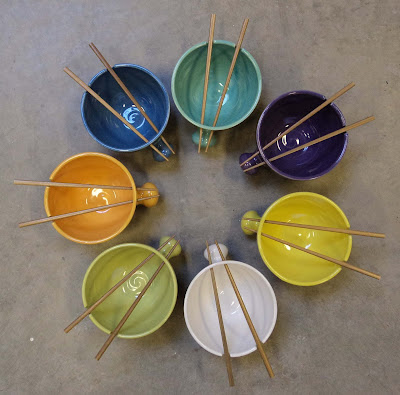 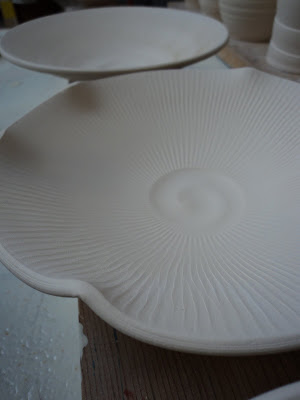 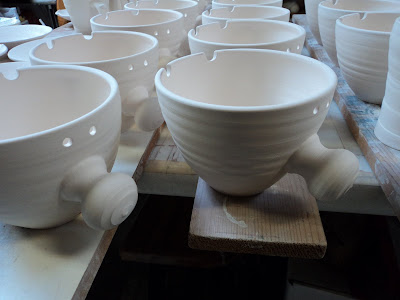 Waiting for their glass jackets. 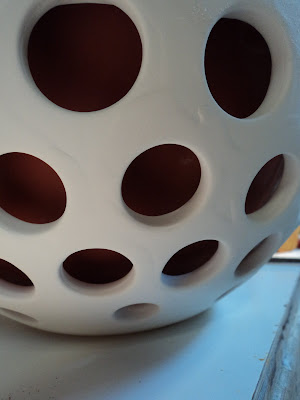 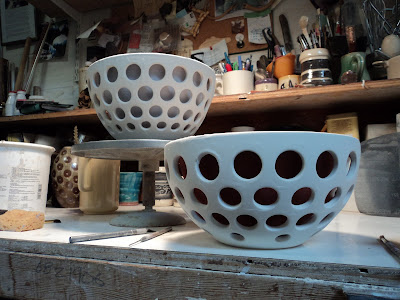 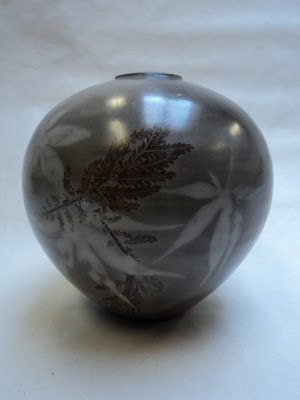 It's interesting how sometimes one thing leads to another in unforeseen ways. I'm currently on one of these little adventures. Post firing reduction is a method used to impart a black, grey, smokey look to a ceramic piece, sometimes using glaze and sometimes not. Western Raku is one of the most well known forms of this and pit firing is another. For many years I have used variations on the pit firing method to finish my Podrums using different materials for combustion, etc. Most typically I would bisque fire the pieces to my desired temperature first, Cone 010 (aprox. 900*C) and then after they had cooled down I would place the drum in an old garbage can filled with newspaper, light it from the top with a blow torch and after a few minutes I'd put the lid on and let the whole thing smolder until done. Usually in about half an hour or so I was able to pull it out. If it hadn't received enough smoke I'd flip and repeat. This was working fairly well and I liked the quickness of it all but after losing a few too many pieces to cracking (thermal shock)I decided to change my approach. I now preheat the pieces to 450 celcius in my electric kiln before placing them in the bed of newspaper. This means the paper ignites almost immediately on its own and there are less hot and cold spots for the pot to contend with. I usually do this on dark rainy nights (not hard to find in Vancouver) so I just let things smolder slowly overnight and by the next morning it's cool enough to pull out. 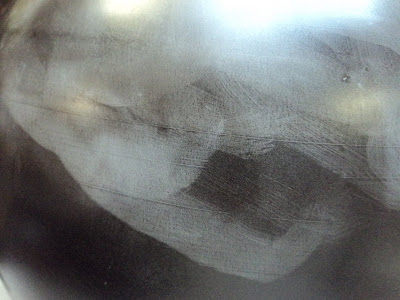 The other interesting angle to this process is that the first drums I tested were ones that I'd burnished. Unexpectedly, some of my fingerprints were revealed after the smoke firing giving an interesting abstract finish. Wanting to play more with this altered, resist like finish I started gathering freshly fallen maple leaves from the trees next to the kiln shed. I placed these on top of the first layer of paper and then pressed the glowing pot into them before covering with more crumpled paper. The results have been very satisfying. The moist leaves don't burn as fast, therefore leaving the surface a bit lighter in that area. I have begun experimenting with different types of leaves etc. and am having a blast. The final step to this process is a light coat of floor wax to bring out the shine. Although their low fire porosity means they won't hold water, these pieces are perfect for showcasing dried flowers or interesting branches. As with all ceramic endeavors, one small change in protocol can lead to something completely different. I'm not sure where this adventure is going next but it sure is satisfying and if you see smoke rolling down Railspur Alley don't call the fire department, it's just me. 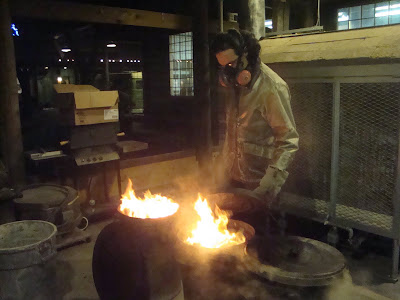 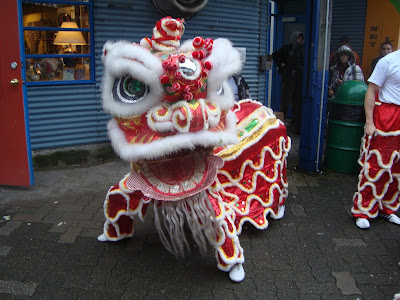 Granville Island was visited by the traditional Chinese lion dancers and drummers today who perform to welcome Spring, ward off evil spirits, and bring good luck for the coming year. Merchants hang a head of lettuce with a red money envelope hidden inside, and the lion tears it down, neatly extracts the cash and  merrily flings lettuce leaves all over the entrance to the store. It's very exciting! We were hanging our lettuce and a woman came by and told us to hang it higher, and hide the envelope to make it more challenging! So we did. 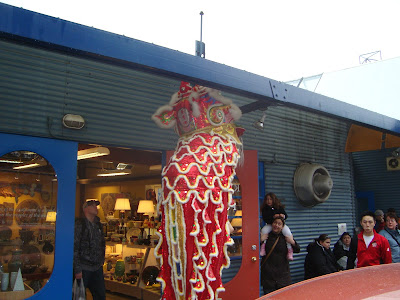 He was a very agile lion and got the lettuce down quite quickly, 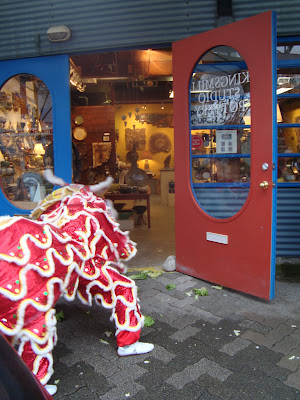 and very considerately managed to not actually throw it on the customer who was in the store. 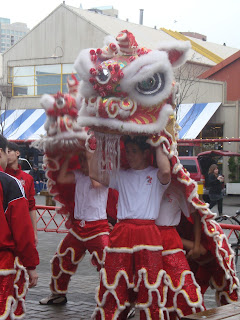 So, that was awesome all round. 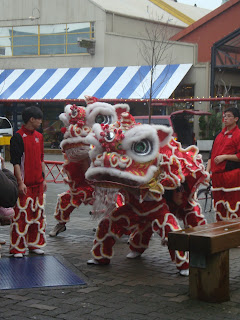 Happy Year of the Rabbit!

ps. Don Hutchenson just brought some lovely rabbit-themed wares into the shop!
Posted by Carole at 10:24 PM No comments: